I love noticing when my opinions change.

I see it as a reminder of the kind of person I am and want to continue to be; open-minded.

I am susceptible to change just like everyone else and I’m glad that I am. It proves why knowledge is power and why I strive to learn more and more about Feminism every day.

I can admit when I am wrong and can take on other people’s opinions, even if it hurts a little to acknowledge it.

I’ve decided to revoke my opinion about changing the name of Feminism to something like ‘Equalism’. Something as simple as a comic strip made me change my mind. A simple drawing and speech bubbles made me realise that changing the name to make it ‘more inclusive for men’ is just a form of back stabbing and a firm kick in the proverbial cunt.

If men are threatened by a word then that’s their issue. Why should we change the name to something else just because they don’t understand what it represents?

History means ‘his-story’ but we don’t go round demanding the word to be changed to ‘hisandherstory’ we know we are included in this word and that we are part of ‘his-story’. Just because it’s a male word doesn’t mean we should suddenly be up in arms and offended by it. It goes without saying, we are part of history, we are not forgotten.

If they can’t understand that Feminism just means equality, then that’s their ignorance. If a man knows what it means and is still threatened by it then… well, it’s word… let them be threatened – it just helps to prove that there is inequality if they can’t stand and support a female word.

And in some ways it’s just a bit insulting towards the men who do get it and support feminism, it’s like saying – ‘You don’t understand what this word means, silly boy, that’s why we are simplifying it for you! Yay!’

So yes, I’m assured of my stance on this one. I’m sticking with and standing by Feminism.

Here is the comic that helped come round to this view; it’s by Rebecca Cohen – 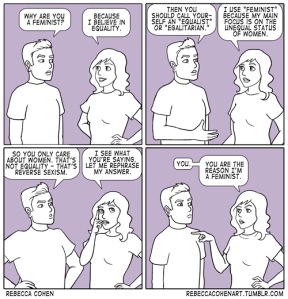 If people really think that focusing on the people who are facing the inequality is reverse sexism then I say to them -‘bunkum! Hogwash! Codswallop!’ – make of that what you will.

I also had an interesting discussion about the phrase ‘like a girl’ when I posted this photo on Facebook. 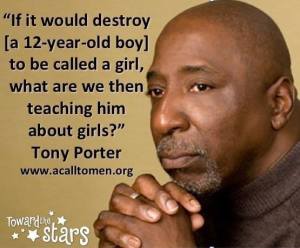 One of my friends pointed out that calling someone a gender they are not is what’s offensive.

‘I think it’s more the offence of calling someone a gender they’re clearly not. I’d be offended to be called a boy, but that’s because I’m a girl, not because society has taught me that being a boy is of lesser value.’

Now I agree with that to a certain extent when I was in my teens I had short hair and was called a boy, oh and a lesbian, because of it. I found being called a boy offensive because, well, I wasn’t a boy.

But of course being a boy isn’t of lesser value, but in our society being a girl is.

It’s often thrown back in our faces when we behave in a stereotypical girly manner or when we can’t do something like change a tire or fix the plumbing – it’s because we are female that we can’t do these things.

Of course! It’s not because I haven’t been trained to do it… no, no it can’t be that!

We are also called butch or tomboy (names I can’t stand) when we stray from the stereotype as well, we are made fun of for not being girly and then put down for it when we are – we can’t win!

‘No I’m just doing stuff I like and wearing clothes that are comfy.’

Boys suffer for it too.

Whereas, for a man, to be stereotypical is celebrated. Being an alpha male is THE goal – being able to drink copious amounts of liquor and lift weights is the dream! But, if you can’t do those things or if you are of a ‘softer disposition’ then you are told to ‘man-up!’ and if you can’t ‘man-up’ then…. well… you are demoted! You are emasculated and become something utterly repulsive and embarrassing.

Heavens no… a woman!

I found this discussion apt because Always has started a campaign tackling this very issue. It’s time to see that being a woman isn’t a bad thing, not just for men, but for women too.

In part, I believe my friend is right, if a man said that he was offended by being called a girl just because he’s not a girl then I would believe him. But I can’t ignore the fact that there are other meanings and insults that underline this phrase when it is said as well.

If it’s said and intended as an insult then that just proves it, doesn’t it? If it didn’t mean anything else then why use it as an insult to begin with? Why would you attack someone’s gender otherwise?

It’s exactly the same the other way round, when a woman says ‘you are such a man’ you know there are other inferences being thrown at you, there are hidden meanings.

To a manly-man though he would probably only hear it as a compliment.

It all reverts to stereotypical insults, and I am very much fed up with it – so let’s just stop using gender related insults altogether and let’s try to be more conscious and celebratory of our differences.

I end on the awesome Always advert –